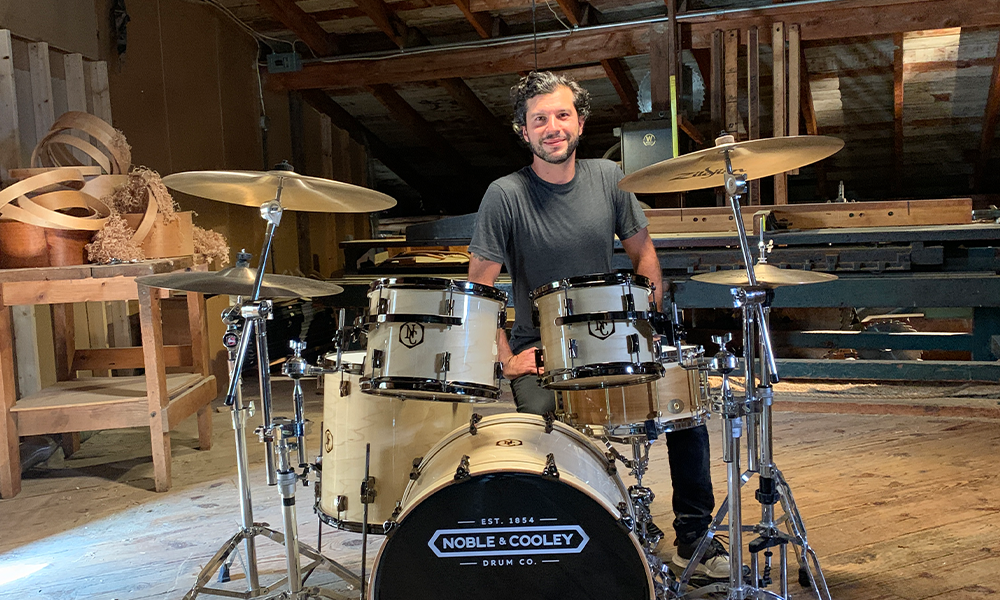 October 21, 2020 / Noble & Cooley, a family-owned premium drum manufacturer specializing in handcrafted snare drums and drum kits for some of the world’s leading professional drummers, announced today that Luke Garro has been appointed to the newly created position of General Manager.

At an exciting time in the 160-year-old drum company’s history, Garro is contributing to the development of the strategic vision and business plan for Noble & Cooley, charting the course for the brand’s next chapter of growth. He is responsible for guiding sales, marketing and partnership strategies, and evaluating opportunities to accelerate growth. In addition, Garro is overseeing day-to-day operations for Noble & Cooley, driving operational efficiencies and evaluating key investments in equipment, infrastructure and talent. Garro, who joined Noble & Cooley in September 2020, reports to CEO John Keane and is based out of the company’s headquarters in Granville, Massachusetts.

Garro brings to Noble & Cooley a truly complementary set of skills, passion and experience, including nearly three decades of drumming. Luke has played the drums for bands such as Fast Break and In My Eyes, and for the past 19 years has been the lead drummer for an alternative rock band, Piebald, touring internationally. A true creative entrepreneur, Garro began his 20-year business and marketing career by co-founding a company called Street Attack, which was a pioneer in guerilla, grassroots, experiential and social marketing just as social platforms came on the scene. The company rebranded as Antler in 2009 to better reflect its strategic shift to digital and social-focused offerings. In 2013, Antler was acquired by GYK Marketing to become integrated marketing company GYK Antler. As EVP, Content Director, Garro played a significant role in helping to build GYK Antler’s social and content production capabilities, leading modern marketing initiatives for both established and emerging CPG and lifestyle brands, and fueling company growth through new business efforts.

Garro is also joined on the company’s management team by Noble & Cooley Production Manager Lou Scalzo, a musician, carpenter and drum builder. As part of the company’s efforts to continually enhance its world-renowned products, Scalzo has been hired to improve manufacturing processes and create efficiencies on the shop floor. He will also guide production techniques, from innovating new shell concepts to woodworking to custom paints and finishes. A skilled craftsman, Scalzo began working in carpentry in the late 1990s, honing his creativity over time to become a fine finish carpenter and furniture builder. Prior to that, he worked in the music sales and recording industry, becoming a well-rounded recording and live sound engineer.

Scalzo had the opportunity to bring his skills to the drum manufacturing business when he first joined Noble & Cooley in 2003. There, he learned the craft of steam bending drums and handmaking components from solid brass to sculpting fine boutique drums. Years later, Scalzo joined drum company SJC, where he increased his knowledge in manufacturing drums and created new ideas for innovative drum designs. An accomplished stage musician, Scalzo has been a drummer for nearly 40 years and played the drums in bands for audiences across the United States and beyond.

“Noble & Cooley is all about craft, innovation and family. The company has been shepherded by generations of people passionate about bringing the highest quality drums and experiences to customers across the globe. I’m excited to bring some fresh perspectives to the table and to help chart the course for the company’s next chapter,” said Luke Garro. “Lou and I both have drumming in our blood, and I’m very much looking forward to partnering with him and this great team to advance Noble & Cooley’s goal of becoming the world’s foremost premium drum boutique.”

No other drum company in the world shares Noble & Cooley’s history of innovation and production. The company can trace its lineage back to 1854, to humble beginnings with Silas Noble and James P. Cooley making drums by hand in the Noble farmhouse kitchen. The duo would later move to a factory that would craft more than 100,000 drums each year, including those used by the Northern Regiments in the Civil War. From designing the first modern steam bent drums to creating the largest drum on record to being on the forefront of the custom drum movement and premium drum era, Noble & Cooley has been an innovator in the drum making industry since it began.

Noble & Cooley is part of York Creative Collective (YCC), a privately-owned ecosystem of creative ventures working together to maximize their growth potential. YCC was founded in October 2019 by GYK Antler CEO Travis York with the mission of building brands and businesses that are connected by a shared focus on quality, craft and authenticity. GYK Antler’s creative marketing services serve as the growth engine powering the collective.

Of Garro’s appointment, Travis York said: “I’ve had the pleasure of working with Luke since 2013. As the YCC and Noble & Cooley leadership team began mapping out a strategic plan for the brand’s next chapter, it was undeniable that Luke had the perfect blend of talent to bring to the company. His experience building businesses for the future and passion for the world of music and drumming is exactly what they need to propel this iconic brand forward. I’m excited to see Luke’s vision brought to life, and how Noble & Cooley shares its legacy of craft and innovation in a way that inspires the next generation of drummers.”

About Noble & Cooley
Noble & Cooley is a family-owned premium drum manufacturer specializing in handcrafted snare drums and drum kits for some of the world’s leading professional drummers. No other drum company in the world shares Noble & Cooley’s history of innovation and production. The company can trace its lineage back seven generations to Silas Noble and James P. Cooley’s humble beginnings manufacturing drums in 1854. A true industry pioneer, Noble & Cooley was at the forefront of the custom drum movement and has raised the bar for drum manufacturers everywhere, almost single-handedly creating the boutique drum market. The company continues to innovate to this day by regularly introducing new designs and always seeking to push the envelope of drum quality. http://www.noblecooley.com

About York Creative Collective
York Creative Collective (YCC) is a privately-owned ecosystem of creative ventures working together to maximize their growth potential. YCC believes creativity is the ultimate brand and business advantage — it challenges ways of thinking, fuels big ideas, opens the door to new business opportunities and propels an entrepreneurial spirit. Ventures that are part of YCC are given access to a comprehensive suite of resources to help them grow and thrive while they prioritize and focus on what drives their business forward. This is why YCC has put marketing services at the center of its creative ecosystem to drive growth. Whether they need strategic counsel, business operations support or supplementary capital through its partnership with York IE, ventures can create efficiencies through YCC’s shared services offering. https://yorkcreativecollective.com